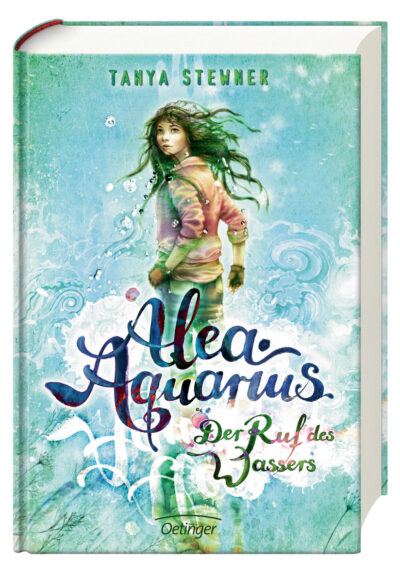 ALEA AQUARIUS – 6 titles
by Tanja Stewner and illustrations Claudia Carls
A different kind of mermaid story – no fairytale, but dealing with the current issues of water pollution and climate change!

An ancient, magical civilization exists underwater, long forgotten by us ordinary humans. Its citizens face extinction, poisoned by the pollution of the oceans. When an orphaned girl sets out to explore her past, she discovers she is one of the rare survivors of the mer people and that it is down to her to save the water world from destruction.

Alea Aquarius imparts courage, stands for friendship and is dedicated to protecting the environment and helping her fellow humans – the perfect recipe for hours of reading fun with Alea and the Alpha Cru.

The adventures of Alea Aquarius have touched the hearts of children across Germany and abroad with their emotional story of love and friendship set in a unique mythical universe. Alea Aquarius breaks with the traditional notion of romantic mermaid stories. Instead, it combines a rich, adventurous underwater world with great friendship, tender romance and one of the most pressing issues of our time: The threat that humanity is causing for the environment – a hot button issue amongst young audiences.

Check out the Alea song “No Longer Silent” on YouTube and see how active Alea’s fans are on social media: INSTAGRAM

Oetinger just published the sixth volume which went straight to the top of Germany’s bestseller list. Over 650,000 books of the series have been sold and the film rights and subsequent series have been snatched up by ZDF Enterprises and will be released in German and English! Please follow the link to further information: FILM RIGHTS SOLD

FILM POSTER – film to be released in English and German!

Link to the book trailer: https://youtu.be/eTfFWQosz3Y

There is a magazine as well and a website: http://www.alea-aquarius.de/

Please do get in touch for further details.

Are you afraid of spiders?